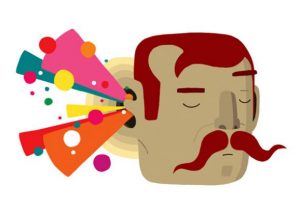 All human beings have 5 senses that have a physical location (ears, eyes, tongue, nose, skin), and one that doesn’t. The 6th sense is only a feeling, which is why it’s often very hard to explain. We all have strange senses that are hard to make sense of. Below are the 4 most common.

It’s common that you get a feel for some people before they even utter a word. It’s like another sense of smell. In a perfect world, it’s wrong to judge people before you get to know them inside out. But this is not a perfect world. It happens that within a fraction of a second after meeting someone new, most people get some impression about their emotions and personality. This is perhaps the most widespread manifestation that 6th sense exists.

2.      Some people can see impossible colors

Have you ever tried to imagine a new color that you have never seen before? Like inventing one? Most people find that they can’t do it. That’s only so because you’ve seen a lot of the possible colors. The the fact is that there are tons of colors out there, most of which we don’t have the ability to see under ordinary circumstances. But scientists have proved that by fooling the eyes, we can see a lot of other colors that don’t even show in the rainbow. And how does this happen? Sixth sense!

Studies have proved that men can sense when women are most fertile. And not only this – men record a subconscious change in behavior to accommodate this! Women tend to exhibit certain subtle changes in the skin tone, scent, and voice when they’re ovulating. And without even knowing it, men can pick up this.

This is something different, one that common analogies cannot explain. In a study, an old blind man in a maze was told to try and find his way home. What happened is that he found his way home without a single wrong move. Somehow, he could ‘see’ the twists and turns, walls and other structures. But just how? His retina had figured a way to bypass his virtual cortex (apparently broken) and transmit data to the brain. Although he was blind, his brain and eyes had found a way around it. However, he was unable to escape a wild animal that the study scientists had placed in the same maze. In a different study, researchers presented blind people with images of sad and happy people. Most of the time, the blind people managed to tell which face was happy, and which one was sad. That is despite the fact that they couldn’t even see the faces. All this phenomenon is called blind sight, and it’s undeniable proof that 6th sense exists.

There are many other things that ordinary people are able to do with the help of the 6th sense. Among other things, this includes being able to detect liars and sense danger. You can benefit a lot by learning to harness and trust your sixth sense.