5 Tell-tale Signs of a Nervous Person

In specific, learning how to read body language is necessary to tell if someone is nervous.
Here are some signs of a nervous person:
General signs
A closed or defensive stance may indicate one is nervous. This is a subconscious need to guard ourselves.
Another stance that nervous people take is sitting at the edge of the chair. This, accompanied by foot tapping, denotes unease and nervousness.
Hands
Many times, nervous people exhibit the habit of biting their fingernails. Playing with small objects can be a sign that a person is anxious. Fidgeting or finger tapping are also signs of a person trying to divert one's anxiousness into something else.
Most importantly, seeing a person wipe his or her hands frequently is a sign that a person has sweaty and cold hands — a sure sign of nervousness.
Face
The face also exhibits signs on nervousness. Usually, nervous persons have dry mouths. A person who licks his lips is most likely nervous.
Nervous people also tend to blink more often than normal. By making eye contact during conversation, this can be easily determined.
Sweating
Aside from the palms, sweating in the forehead and neck is a sign of nervousness. The soles of the feet may also become sweaty.
Shaking
Trembling hands can definitely be indicators of nervousness. Nervous people tend to shake.  Shaking feet are a sign too, which makes one lose a bit of control while walking.
In some cases, shaking may be accompanied by dizziness, which could hinder one's ability to stand upright. These people may also feel faint.
A little bit of nervousness before a certain event isn't at all bad: it could lead to heightened awareness, improved performance and vigilance.
However, when the nervousness cannot be controlled, here are some tips to manage it:
Carbohydrates
Carbs are touted as a calming food for most. Carbs release serotonin to the brain, which acts as a tranquilizer for the body. This is the reason why these kinds of food are called comfort food!
No caffeine
If possible, avoid caffeine. Caffeine only adds to nervousness, which makes one jittery and uneasy.
Deep breathing
Encourage the nervous person to take deep breaths. Slow and deep breaths through the nose will help calm down a person. Holding the breath for a few seconds and releasing it slowly from the mouth helps a lot. 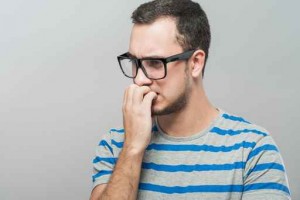 Verbal encouragement
Nervous people need a little bit of encouragement and backup to let go of the unease. Saying phrases like “I'm here with you” or “Everything will be okay” may encourage the nervous person.
Slow down
Nervous people usually act quickly, speak fast, and cannot seem to hold one's place. By making them slow down their speech and movements, the restlessness can be controlled.