Body Language Mistakes to Avoid to Get a Job

Body language plays a very important role when it comes to human interaction and in fact, being conscious of it and knowing how to properly express body language can make or break your job interview. 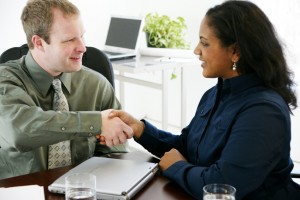 Avoid the following mistakes to increase your chances of passing that job interview:

People have been told numerous times by their parents or their elders about the importance of standing up straight but the fact is that it is rarely taken seriously. However, standing up straight in an interview, or rather, having good posture can potentially affect how the interviewer sees you. If you want to give a good impression, refrain from leaning back on the chair too much because this can be interpreted as having a lazy character or an arrogant and lax attitude. At the same time, leaning too forward can give the interviewer the impression that you are too aggressive or like you just want to get out of the place. Just sit up straight and relax.

When being interviewed, refrain from pointing or from fiddling too much because this can be misinterpreted by the interviewer as discomfort on your part and can also be taken as being too aggressive. The best practice is to simply put your hands on your lap palms down because having your palms face up gives the impression that you are begging and might be taken negatively when you are in an interview.

This includes fidgeting which is something that you should refrain from doing because it is a clear sign that you are nervous or anxious and this is viewed as unprofessional. Shaking your foot, playing with your hair strands, and other similar little gestures may seem nothing to you but can be perceive negatively by the interviewer. Make sure that both your feet are flat on the ground and try to relax.

Speaking in a fast-paced manner tends to be viewed the same as when a person is fidgeting. People who speak in a fast-paced manner tend to give the impression that they are nervous or anxious and this can negatively impact the outcome of an interview. The same goes when a person is stuttering with the things he or she is trying to say. The best way to handle this is to closely listen to the interviewer and try to understand what he or she is saying and then take time to think about it and express it in the simplest and concise way possible.

Body language should not be neglected or taken for granted especially during business meetings or interviews. By being aware of it, you can express yourself better and send more positive body language.