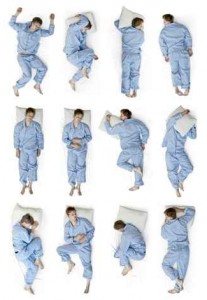 Take a look at these different sleeping positions and habits and their meanings to see if it really describes your personality or not.

You are in a Fetal Position or the so-called ‘The Thinker’ if you usually sleep sideways with bent knees and both arms are either resting on the pillow or the one arm is under the pillow while the other one is lying near the chin. This position may convey a tough exterior but deep inside is very shy and sensitive. They tend to be shy when meeting somebody in the first place but sooner they will be comfortable.

You are a yearner if you usually sleep like the fetal position but with one leg slightly bent and the other leg is straight, arms outstretch along the pillow and the face is near the edge of the pillow. According to body language experts, you are an open nature but maybe suspicious and cynical if you are a yearner. You are also slow in decision making but once you’ve decided, you stick to it.

Log or side sleepers tend to sleep on one side with straight legs and extended arms downward. Usually the personality of this person is easy-going and loves social activities. They also trust easily.

Soldier position tends to sleep straight with back, arms and legs straightly lying on bed like a standing soldier. People who sleep this way are mostly quiet and reserved but would tend to set high standards for themselves.

If you tend to sleep mostly with your abdomen and arms usually embracing the pillow, you are freefall sleeper. Persons who usually sleep in this position is said to be nervy and tend to reject criticisms. They also do not like to be put on hard and tense situations.

Starfish sleepers used to lie on their back and spread both arms and legs out like a star. This kind of sleeper is mostly friendly. They value friendship a lot and are very loyal. They are always ready to listen on other’s problems and love to help as much as they can. They do not like to be the center of attention.