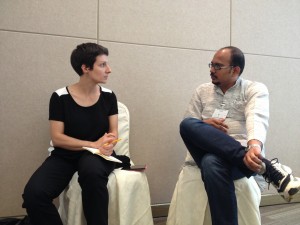 Being conscious of your body language should not end just because you were successful in sending positive body language to the interviewer. Being aware of what your body language is telling the people around you especially in the work place is equally important because this influences how they would interact with you or perceive you.

The last thing that you want to happen is to get on the bad side of your supervisor or your co-workers.

Here are some common gestures that you may have displayed in the work place and their corresponding and subtle meaning:

ure is usually interpreted by people as being guarded or a sign of discomfort. People who tend to cross their arms often give the impression that they are not approachable. However, keep in mind that for most women, this can also be their means of keeping themselves warm especially when the work place has a cold temperature caused by air conditioning.

This behavior is often interpreted as being bored or nervous. Though there are really people who tend to display this behavior out of habit, you may want to refrain from doing so when you are in a business meeting with your superiors or team mates. Women tend to tap their foot when sitting cross-legged while guys tend to bounce their knees when restless. Practicing yoga helps keep this behavior in check.

Not all people are used to smiling and though not showing a smile does not always mean that the person does not like what is happening or what the other person did or a dislike toward a certain person, smiling more can help build rapport between people. On the other hand, not smiling can be misinterpreted as you being against someone or not liking someone or being a snob and is not favorable.

Looking Up or Anywhere Else When Answering a Question

Refrain from looking elsewhere when someone is talking to you or asking you a question because it is interpreted as being rude. At the same time, it gives the impression that you do not know the answer and that you are nervous. In case you find yourself in a spot that you are required to answer but unsure of how to answer, try your best not to look around and to calm yourself. Practice making eye contacts but refrain from staring too much because it also is interpreted as being rude.

Knowing the subtle meaning of physical gestures and other body language is important in establishing a strong and healthy relationship with the people around you.