The Mentalist Ehud Segev was interviewed in the media about the correlation between corporate events ideas and CBS's new primetime TV show “The Mentalist”.

Segev explained that the new show contributes to the world of entertainment because it creates a huge buzz and converts the art of Mentalism into the new trend in corporate events.

The media wrote that Mentalist entertainers all over the world can't thank CBS enough for their new TV show because the series made the art of Mentalism such a hot trend in corporate events and they no longer needed to look for a great corporate event idea. It was right there – before their eyes! Every weeknight, on primetime!

When it comes to Ehud Segev's Mentalist career it was far away from being a scripted drama. For Mr. Segev – this art was actually a unique way of life. He performed critically acclaimed shows as a Mentalist off-Broadway in Times Square and these mentalism shows made him so popular that TV stations and producers booked him to perform on national television. But the art of the Mentalist wasn't quite easy to understand. 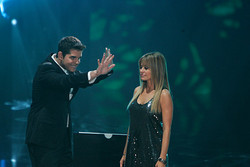 Corporate Events Mentalist
“When I started performing as a mentalist no one knew what Mentalism is”, Ehud said, “The media all over the world was blown away by what I was doing but no one knew what to name it. At one point I was given by the press pictures of mayoral candidates, and I used my mentalist intuition and mentalism knowledge of ‘reading people' to predict which one of them will win the elections. I was 100 percent right. The media gave me the title ‘The Mental Analyzer' which soon shortened to ‘The Mentalizer'”.
“Montel Williams invited me to the show”, Segev continues, “and he was hosting Sylvia Browne who calls herself a spiritual teacher and psychic. He introduced me and said that my special talent allows me to create mind boggling tricks with my mind. Psychic Sylvia Browne said it's all real although I had no supernatural powers at all. I simply used the Mentalism techniques I developed throughout the years”.

“First ones to jump in the boat were the magicians,” Says mentalist Segev, “who didn't have to work hard in order to transform from being a magician into becoming a mentalist. A small metamorphosis turned their magic tricks into mentalism effects”. Because now, that CBS's new show “The mentalist” became such a big hit and broke some records in ratings, the corporate events party planners who were seeking to find great corporate events ideas and gimmicks realized the potential. The press says it was the award for “Favorite New TV Drama” at the 35th People's Choice Awards or Simon Baker's nomination for Outstanding Lead Actor in a Drama Series for his mentalist role at the 2009 Emmy Awards.

The bottom line, though, is that the huge success of the mentalist TV series got people talking and all of a sudden everyone is realizing that Mentalists can become the hit of every corporate event.

What a smart strategic move because the demand for a great corporate event idea was for a new, exciting and unique form of entertainment. That's why a mentalist who performs strolling or walk around as a part of the corporate event guests is a great idea and a sure success.

9 Psychology Truths That Will Blow Your Mind Away

There are few things more interesting than the human mind. Other than perhaps rocket science …