I wanted to unlock the secrets behind this beautiful art called Mentalism. Why? Because after the article that was published about me in the “Wall Street Journal” everyone I meet in the street (and not just Wall Street!) stops me and asks me if I can teach him (or her) some mentalist secrets! But that's when I stop and ask: Do you even know what a Mentalist is? And that's why I'm writing this article!

But don't worry! If you're ready to be a professional mentalist and know when someone is lying to you, or predict what they are going to say or do – you can still get all the Mentalizer secrets and tips for using your brain to achieve success in life. Simply register here to get notified directly by Ehud Segev CLICK HERE. 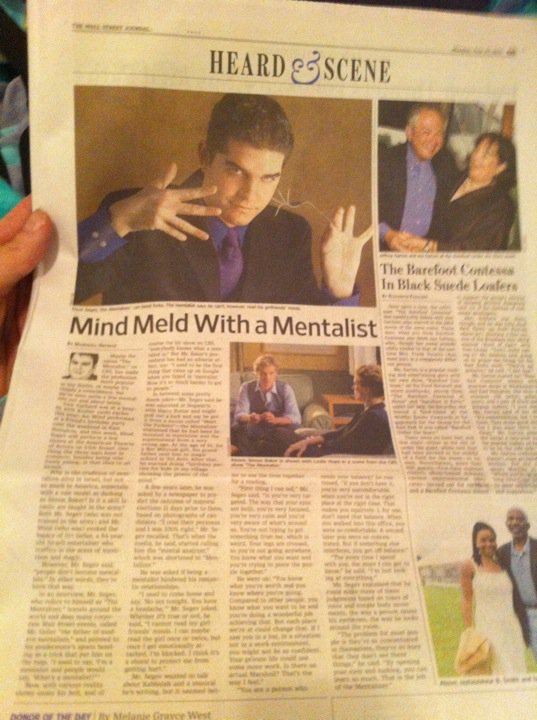 Yes, it's no secret that EVERYONE wants to be Mentalists these days. There are many reasons for the popularity of the Mentalism art. But before we start learning the mentalist secrets  – we must first understand what exactly is a mentalist – or more important: the difference between a stage mentalist and a real life mentalist.

What? There's a difference between a mentalist who performs on stage or in corporate events and a “real life” mentalist? Yes! A huge difference! And this is the first thing I try to explain to my fellow street friends. What you see is (not) what you get. And what YOU see, is not what the mentalist can SEE. And believe me, there's a lot for the mentalist to see!

But let's start by understanding the secret tools of every mentalist, whether he works as an entertainer or hired by the police (such as Simon Baker – our favorite TV mentalist): Body language, Neuro Linguistic Programming and elements of hypnosis, great memory, cold and hot reading and other methods of that sort. The greater their knowledge – the better they become in ‘Reading' the people and guessing their thoughts and feelings. The more knowledgable they are – the more ‘intuitive' they become. I won't go deeper into explaining my motto that says “Intuition Is Knowledge”, but I'm sure you'll hear a lot about it in my future articles.

So a good “Real Life” mentalist uses the above mentioned techniques. A bad mentalist doesn't use these techniques and instead he uses gimmicks and tricks to achieve an illusion of a real mentalist. A stage mentalist entertainer who performs his craft for a living is right in the middle. He uses all the techniques he learned – and keeps on learning on a daily basis – but he doesn't stop there. You see, entertainers must achieve one very important goal in their performances. They must entertain. And what can you do – sometimes when you perform ‘live' you don't have as many achievements as you would in real life. There are many reasons… When you're under the spotlight then your audience might be extremely excited and under these conditions it'll be hard for you to analyze them and ‘read' them. Or they might try to ‘fool' you on purpose in order to prove you can't read them!

That's why stage mentalists must use additional techniques which aren't what I consider ‘pure' mentalism. If ‘pure' mentalism will mean to meet a person and immediately know who they are and what they have in their mind – then a ‘dirty' mentalism will be to TRY and read someone, but have some gimmicks to confirm the readings whether it's the person's thought or a different piece of information you need. And these gimmicks can be found (usually) in magician shops or other magic dealers. Or you can get my fun DVD Be a Phenomenon (click here to order it) to learn some really simple effects that you can perform with everyday props. Or if you didn't signup to my newsletter (what??? you made it all the way here and still haven't subscribed?! 🙂

Before you continue reading, make sure you join my list so you'll get all my Mentalizer secrets and tips for using your brain to achieve success in life:

In my full program “How To Be a Mental Analyzer” I go in depth and teach all the biggest secrets of Mentalism. But I'm always being asked if there's a way to ‘cheat' or ‘trick' your way to being a better mentalist. Well, I decided to share this trick with you guys, although you'll learn all the real meaty stuff in the full program. So here's a great example that helped me achieve greater knowledge in reading body language to know if someone is lying to me or not: I would ask three of my friends to write something on 3 slips of paper. I would ‘trick' them to think I don't know who wrote what – when in fact I put a little mark on each slip of paper. Yes, I tricked them. They had no idea I know which slip of paper belongs to which person. Then I started reading the things they wrote. I asked them some questions about what they wrote and looked at all the signs I could get. The signs are eyes, mouth, and other subtle movements, expressions, the way they move their hands and of course – the way they speak (their pitch, pace, volume, tonality, rhythm and more!). Remember I knew who actually wrote what, so I could play along as if I don't know and based on the things they told me I could tell who is lying to me and who didn't. It helped me learn what certain people do when they lie. Isn't it a great practice? I highly recommend that you'll do it if you're trying to learn how to be a mentalist.

What you read here is only the tip of the iceberg. You can LEARN EVERYTHING. Yes, you can master the field of Mentalism and become amazing in everything you do.

Make sure you join my list so you'll get all my Mentalizer secrets and tips for using your brain to achieve success in life: