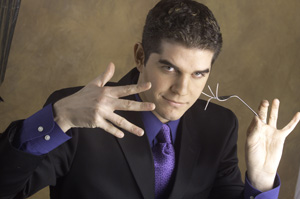 World renowned mentalist Ehud Segev, aka The Mentalizer, rose to fame on NBC’s The Phenomenon, judged by Uri Gellar and Criss Angel. Ehud will be completing his world tour with two performances in New York City, on 27 and 29 June, of his extraordinary show, also titled The Mentalizer.

Born and raised in the Israeli city of Safed, were you brought up with an awareness of spirituality and mysticism or is this something you became more aware of after your reading about the subject in books borrowed from your local library?

That's a great question because I don't remember myself.

It's amazing how as a mentalist I was always drawn to the world of unknown and unexplained. I was searching new worlds and explanations in my mind since I can remember, but I'm not sure it has to do with the area I grew up with. There must have been a few things that influenced me, I just can't recall what they were. I guess the universe simply wanted me to find this path as a mentalist, no matter what, and so I did!

Were you ever intimidated by your own abilities, which in later years lead on to connecting with parallel universes through séances?

I was a very young boy, maybe 10 or 11 years old, when my friends said in a class party: “Let's perform a seance!” I didn't even know what it meant so I asked them and they explained that it's a manifestation of talking to the next world. I was overwhelmed. I was so young I didn't know if it was real or fake, or if it was only a game, but it did touch some secret areas in my heart that kept me learning more and more about it. And so I started doing these séances as a kids' game – yeah, it sounds funny – but slowly more and more people requested to take part in these weird games. Truth is that it was nothing but a game for me, and only later I started giving it my own explanations. I don't think we actually talk to ‘dead people' in séances, I think it is a way to communicate with your sub-consciousness. Today I barely do it anymore.

At 16 you faced criticism and scepticism from religious leaders who sought to ban your attempt at the largest nationally broadcast séance channelling slain Israeli Prime Minister Yitzhak Rabin. Was it difficult to face that doubt at such a young age? Do you have any regrets about the séance never being performed?

As I’ve mentioned, it was a child's game for me, and I believe I was very naive and pretty stupid because I didn't know what I was doing, but I wanted to do it on a bigger and bigger level. I'm happy it didn't work out in the end, because I don't know what impact that would have on me and my family. But I learned a lot from it.

Today I have some issues with everything that is religion. I'm working on a musical, I’m writing, which is one of the first spiritual musicals ever to be written, where every song is a spiritual lesson to be told. One of my songs is sang by a witch, that has no more powers – only because people stopped believing that magic exists. And she sings: “Here's what I learned: We ALL seek a guiding hand… We pray… To God… To understand! But what we really need, is not a CROSS or a STAR… What we need is a magic mirror: to help us look inside!” So this is what I think. Everyone is looking at religion as if it's his or her saviour. They wear a cross on their chest, or the Star of David and other symbols of religion. But what we really need is first to look deep into our souls and understand what we want, what we need. Only then we can start looking elsewhere.

Do you believe that your abilities and religion can work together in unison or are the two things entirely unrelated?

I'm not a religious man at all, so I'm sure it can! I keep on working on my abilities and developing new methods and techniques to touch more people and hopefully one day make a change in this world. Amen!

Eventually, you put together a performance showcasing your abilities in The Mentalizer, which premiered in New York in 2004. What was the process for keeping your integrity and staying true to yourself whilst creating an entertaining show?

I think that this is truly my purpose in life. Yes, I have some abilities that I’ve been working on since I was a young boy. But I also have another great ability which is a good presence. When I'm on stage I feel that I can truly reach out and touch people. Masses of people. So this is a wonderful combination of entertaining people and touching their hearts at the same time. This can truly bring to a change one day!

What has prompted you to return to New York with your show The Mentalizer, which plays for two nights at the American Theatre of Actors/Chernuchin Theater on 27 and 29 June 2011?

My fans! I have friends and fans all over the world that keep asking me when I'll be performing again! Most of my work is corporate events – I perform as a mentalist for big companies throughout the world and once every few months I open a box-office show and sell tickets. Here's your chance to see me in a theater and not in a private engagement!