As this year’s Hanukkah (or, if you prefer, Chanukah) is drawing to a close, I’d like to share some of my personal thoughts about this holiday.

Now, I can just imagine (being a mentalist, that’s easy!) what your reaction to the headline might be: “Why is Ehud likening Hanukkah to a terrorist event? Has he gone mad?” I can assure you that I am as sane as I have always been (okay, okay, I’ve opened myself up to the derision here), but bear with me for a moment and read on! 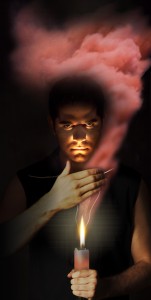 As you know, I am a proud Israeli. I am also a Jew and Judaism is my religion. Why? Because I was born to a Jewish mother. Not because I chose it. But I love it either way!
The Torah is a central concept not only in our faith, but also in the Jewish traditions. However, just because I love my country and inspired by Jewish teachings (especially Kabbalah), doesn’t mean I can’t (or shouldn’t) be interested in other faiths or be critical of some aspects of my own.

In fact, I love studying other religions to understand how the humankind “ticks” and what determines our beliefs, attitudes, and behaviors. Just because I am considered to be “a part” of a certain religion or am attached to a set of principles dictated by my birth, doesn’t exclude a genuine interest in all the others. As a mentalist, my mind is wide open!

So – back to Hanukkah. Beyond the dreidel (a small four-sided spinning toy that I like to spin on its head) and latkes (crispy, fried potato pancakes that ruins my diet every year), and my big tour of Hanukka performances in so many Jewish synagogues and communities around the world – which all became a traditional parts of the Hanukkah celebrations 🙂 more than anything this holiday commemorates an event that happened long ago, in the 2nd century B.C.

At that time, the Syrians and Greeks dominated Judea, the land that is currently Israel. However, a small band of faithful Jews led by Judah Maccabee (and therefore called the Maccabees) drove the invaders away, reclaiming the Temple in Jerusalem. They “cleansed” this holy site that had been “polluted” by the foreign presence and rededicated it as a place of worship. In their attempt to light the Temple's menorah (candle holder), they found only one cruse of oil, but, miraculously, it burned for eight days. That is why Hanukkah is celebrated for eight days and is called “The Festival of Lights.”

These events were described in the First and Second Books of Maccabees, but are missing from the Hebrew Bible. The omission has never been credibly explained, though some scholars have suggested that it has to do with pragmatism and politics, both of which were important considerations then as they are now. After all, the Maccabees’ revolt against the enemies was not exactly peaceful – the freedom fighters and the invaders did not hold hands and sing “The Kumbaya” together. As a matter of fact, many violent acts were committed by the Maccabees, the details of which are better left out of this blog.

But this brings up a valid question: were the Maccabees, the heroes behind the Hanukkah story, freedom fighters or terrorists? By the same token, if we look at what is happening in the Middle East today, can we draw a clear line between a legitimate action for a justifiable cause and outright terrorism?

Now, let me make it clear: I am not taking sides or re-writing history, just reporting it. Speaking of reporting, let’s imagine for a moment that the press, as we know it today, were covering the Maccabees’ revolt. Imagine the Temple in Jerusalem surrounded by reporters, TV crews, CNN, BBC, and other major media outlets. And imagine, too, that all these many news organizations reported the events in an objective and unbiased manner – as they should do anyway.

When you tuned in to the evening news you’d see Anderson Cooper or another journalist standing in front of the temple in a bulletproof vest, as their camera crews zoom in on bloodied bodies of Syrian / Greek fighters, civilians and children.

I do realize, of course, that it is quite a leap to transpose an ancient conflict to today’s sensibilities. It is possible, of course, that in modern times, with the presence of the United Nations as well as diplomacy, the conflict between the Syrian / Greeks and the Maccabees could have been resolved by more peaceful means. I guess we’ll never know but can always hope that would have been the outcome!

Why do I bring all of this up? I do not mean to stir a conflict or offend anyone, but, rather, start a debate. (In other words, don’t kill the messenger just because you don’t like his message!) I’d be interested to know what you think – not just about the events that gave us Hanukkah, but also, for example, the Thanksgiving holiday in the U.S – how its origins lay in the gratitude the Pilgrims felt for having survived harsh conditions in the New World, but went on to enslave or slaughter their Indian hosts and seize their land. Or, any other historical event we celebrate today that has its roots in bloodshed and violence.

Send me your raves, rants, thumbs up or down, or any other reaction and feedback (no expletives allowed, though!).

In the meantime, let’s all decide that, whatever country we live in and whichever traditions we celebrate, we should promote and foster the spirit of peace, harmony, understanding, empathy, and generosity towards our fellow men and women. Let’s keep our minds open and our hearts warm.

If we can accomplish that, the world will truly be a better place, and then we can really hold hands and sing “The Kumbaya” together!

Affirmations That Can Change Your Life Breaking a world record and preparing for February The Biggest Secret of Community

This month marks a momentous occasion, I published my first book, “The Mentalist 9 Steps …