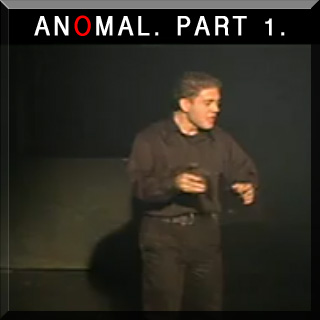 In the video The Mentalist off-Broadway show “Anomal” – Part 1 the mentalist performer Mr. Ehud Segev has done a great job. In this part he is playing with a credit card by his fingers while saying: “I am going to charge this”…

In this video one can view a beautiful sprit of the mentalizer in process and can really amuse himself with the beautiful and cheerful chit chat performed by mentalist Ehud Segev. In the start of the video the performer introduces himself in an interesting way and the audience are left with nothing to do but just to laugh out loud. Then he gets a credit card from a nice lady in the audience and also calls another lady to the stage and then the amazing show of the mentalist starts… He turns his hands around the credit card and then when he gives movements to his fingers the credit card simply moves along the movement! He also charged the finger of the lady and the lady checked it herself. It worked! After that Ehud Segev also performs a beautiful effect in which the credit card was revolving around his hands and body. The audience really enjoyed the show and they were very surprised and happy with this beautiful and unforgettable show of talent. In the last mentalizer effect in this video Mr. Ehud Segve performed just like a one man show and with his classic and comical chit chat the audience were truly amused. He shared a dialogue between his teacher and his father about his special needs as a little boy. Ehud says about himself that he was a boy who does not talk in the class and the teacher thinks that he is deaf and calls on his father Mr. Segev. Now he performs an amazing parody of his teacher and his father. Let me share a part, when his father arrives – Ehud's Teacher says: “Mr. Segev, I am so happy that you have made it… Come in! why didn’t you put your son in the class for special needs?” Now he acts like his father who replies to Ehud's teacher: “My son is a shy boy and I don’t think he requires special program”… Ehud's teacher replies “Mr. Segev you see, your son is not shy, your son is deaf”. These are just a few words that you are reading. You will really enjoy this only and only when you will see it for yourself. And let me assure you that this is one of the parts where you will

enjoy so much. I think this was one of the best performances of the great performer Mr. Ehud Segev and if you get a chance to see this oh never miss it at all!”