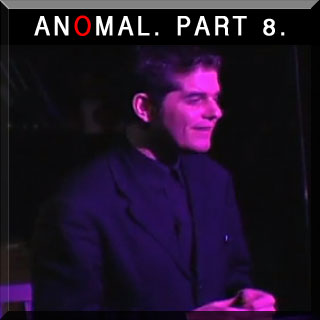 “In the video The Mentalist off-Broadway show “Anomal” – Part 8 (a continuation from Anomal part 7) we notice the mentalist performer Mr. Ehud Segev’s smooth transition of characters, with great flamboyance…

Mr. Ehud continues to speak about his father, how he got his second chance, soon after he was released from the hospital. A father who refused to accept his son the way he was, a refusal which forced not only a separation of opinions and ideals, but also a separation of two people. Ehud’s father realizes this time, the second chance has only opened his eyes to make him realize that his son is special, who is bold enough to follow his dreams… which is a message good enough for everybody to learn to accept people as they are, and accept what is special about them, and above all, we must all follow our dreams and not back away from it.

The performance shifts in character from a story-teller into the mentalizer which he originally is, to make us all realize about our rare second chances in life, which we fail to recognize, by keeping ourselves busy with making money, involving in religious discrimination and war of all kinds, and many more troubles, which force us to lose contact with our spiritualism.

Mr. Ehud in his casual dynamism entertains the audience to create more suspense and excitement, by announcing that he is going to talk about their memories. His spontaneity is one aspect we can look forward to, as he mixes with the audience, and starts talking to a kid, as he seats himself beside a woman. In the meantime, he just places an envelope in the pocket of her friend, and asks her to keep an eye on him so he doesn’t look into it. In this episode of his performance, we not only see curiosity rising among the audience, but also a lot of patience to wait and watch what does this mentalist has in store.

Soon, after he reaches the stage he takes a notepad, and tells the audience he is going to write all their memories. He begins with a confession about his feelings that somebody in the audience had come back from a vacation a few weeks ago. He spots a woman, and asks her if she had been somewhere, and she answers in the affirmative. He writes her answers in the notepad, the name of the place and the airlines she had flown with, only to increase the suspense, if that’s what he had already written in the envelope.

This is just the beginning of a mind blowing psychic game, leading the audience on a journey into a mystical realm beyond time…. Check out the next part for more..