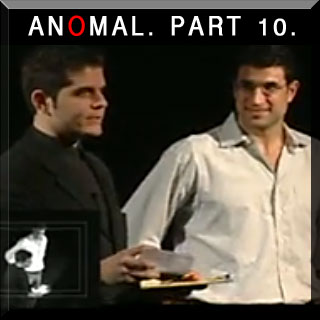 In the video The Mentalist off-Broadway show “Anomal” – Part 10 the mentalist Ehud Segev has displayed a great ensemble, as he switched in and out of different characters with great ease. The aura he exhibits is not only magical but also magnetic enough to draw immense attention from the audience, which supports him with every emotion of his role play…

No sooner it happens, our Ehud further continues with his message that nobody can predict the future, unless somebody has some visions, and in an abrupt manner reveals that he did have some visions, the night before the show, in a manner which slowly reveals different layers of messages that the future is in our hands, and only we can do something to change it for the better, instead of being dependent on somebody else for a prediction, and waiting for something good to happen, when we do nothing to change the “now”, and how important it is to love.

As mentalist Ehud displays his art of control over subtle energies to make us believe that we can bring a transformation in our lives, by understanding each others energy levels and by being perceptive to everybody's needs, and how we can share what we have to create a better environment of peace and joy. A true mystic as we can call him, he tries to bring the whole drama of life together, into a transforming experience, by including the various elements of life by showing us, that love is permanent, and it never ceases to exist, we only need to realize it’s there.

He does bring a wonderful change on stage as he draws the curtains with the message of love, a love for an old woman crossing the street by helping her, love for the family by increasing the time we spend with them, by sharing what we have and caring for others.

This was a wonderful show by the mentalist Ehud Segev, which was unique in its presentation, involving a fine blend of a play and an act, put together with great perfection.

It’s not mandatory you have to watch Mr. Ehud perform in a theatre. Mr. Ehud also performs for Corporate Events and special parties. You can book him for shows and special events also and for other events of any special nature.